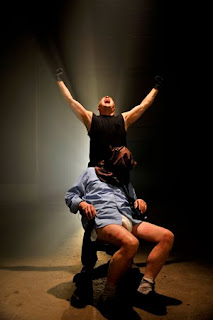 I didn't know what "Skinning the Cat" meant until director Jeff Santa Barbara told me. It's a classic yo-yo move where the yoyo kind of crawls along the floor as if you are walking a cat. I don't know. I'm not much of a yo-yo fan. However, the red yo-yo plays heavily in this movie. "Skinning the Cat" was a successful Stratford stage play which Jeff directed. The theatrical script was converted to a movie script and Jeff asked me to shoot it. I was very interested since it was a play with only two main actors. Matt Willson played the kidnapper and Jonathan Harrison played the hostage. Both Matt and Jonathan have years of theatrical experience behind them. I really looked forward to working on a stage play rewritten for the screen. It may not seem obvious at first but stage plays and movies use different languages. 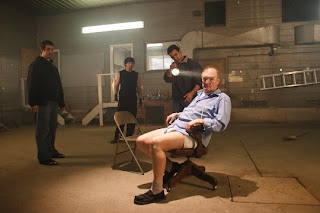 Unlike the theater actor, who gets to develop a character during the course of a two- or three-hour performance, the film actor lacks continuity, forcing him or her to come to all the scenes (often shot in reverse order in which they'll ultimately appear) with a character already fully developed. Since film captures even the smallest gesture and magnifies it 20 or 30 times, cinema demands a less flamboyant and stylized bodily performance from the actor than does the theater. The stage is more friendly to the unattractive, the overweight, and the flawed, while film—despite the advantages of makeup, lighting, soft focus, etc.—is relentlessly cruel to any sign of imperfection in the actor or actress. The performance of emotion is the most difficult aspect of film acting to master: While the theater actor can use exaggerated gestures and exclamations to express emotion, the film actor must rely on subtle facial ticks, quivers, and tiny lifts of the eyebrow to create a believable character.


Fundamentally, each performance is different, and as a film maker, I love the challenge of moving the script forward. Matt and Jonathan where used to project their character's emotions to an audience, whereas in the movie, they had to embody and perform these emotions in as true and believable a way as possible. Capturing them was a challenge. They were used to acting together as a team, but now, they had to do their parts separately, for the wide shots, medium shots and the close-ups. Sometime, Jeff didn't like their performance and would ask for another. Here of course they would have to remember all their lines, gestures, and eye-lines. Another challenge for them was not stepping on each other's lines. I have to admit that these two are consummate professionals, and for their first time on film, they did a superb job! 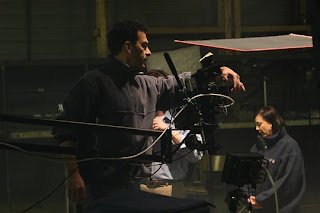 Now for the technical aspects of shooting. I decided to use my Letus lens adapter, my nikon(nikkor) film lens, a Panasonic HVX200(shooting DVCPro HD at 24fps) and a Firestore FS-100 for capture. My challenge when not shooting film is to make video look like film. Movies are shot on film at 24 frames per second and video shoots at 60i. From Wikipedia;

"60i (actually 59.94, or 60 x 1000/1001 to be more precise; 60 interlaced fields = 29.97 frames) is the standard video field rate per second for NTSC television (e.g. in the US), whether from a broadcast signal, DVD, or home camcorder. This interlaced field rate was developed separately by Farnsworth and Zworykin in 1934,[1] and was part of the NTSC television standards effective in 1941. When NTSC color was introduced in 1953, the older rate of 60 fields per second was reduced by a factor of 1000/1001 to avoid interference between the chroma subcarrier and the broadcast sound carrier."

"The 24p frame rate is also a noninterlaced format, and is now widely adopted by those planning on transferring a video signal to film. But film- and video-makers turn to 24p for the "cine"-look even if their productions are not going to be transferred to film, simply because of the "look" of the frame rate. When transferred to NTSC television, the rate is effectively slowed to 23.976 frame/s, and when transferred to PAL or SECAM it is sped up to 25 frame/s. 35 mm movie cameras use a standard exposure rate of 24 frames per second, though many cameras offer rates of 23.976 frame/s for NTSC television and 25 frame/s for PAL/SECAM. The 24 frame/s rate became the de facto standard for sound motion pictures in the mid-1920s."

So the idea is to shoot video and make it look like film. Panasonic's HVX200 DVCpro HD codec shoots 24p. What's up with the Letus adapter? Well, to get to the point, 35mm Letus adapter gives your footage that cool narrow depth of field seen in movies, a true characteristic of film. A narrow depth of field means that less of your image will be in focus; it gives your footage that artistic edge. For example, if you wanted your subject, who is about 10 or so feet from the camera in focus, but you want the background soft and out of focus, a 35mm adapter could do that. Consumers usually prefer a large depth of field so they don't have to bother with focusing, but the pros love it. The 35mm adapters are small modules that connect to your camera lens, and the other end has a lens mount for your choice of inexpensive 35mm photo lenses (remember those things?) or the pro film lenses with a PL mount (but they cost a lost). I decided to use all my old nikon nikkkor 35mm film lens since I hadn't used them in a long time. Boy, I remembered why I had fallen in love with lens so many years ago. What a fantastic look! 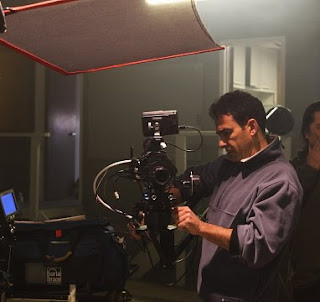 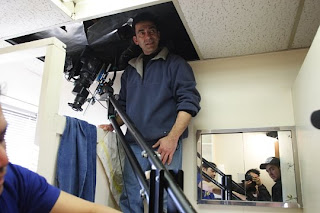 The Firestore Fs-100 is a shooting hard drive. We would shoot the entire day to this drive then offload at night. We shot the entire movie on the Firestore drive without a loss of one frame. All-in-all, I loved this shoot. Very intensive. Long hours. Just loved it!!! 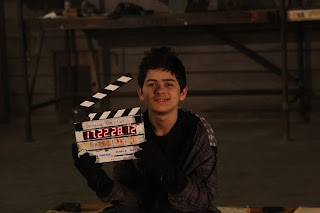 Posted by Mario Madau at 6:52 AM No comments: