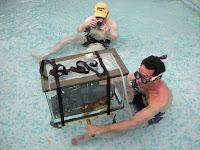 Hello out there.  Just started my blog today.  I'm a photographer/cinematographer and work on projects worldwide.  I've set up this blog to keep people abreast of where I am and the things I'm shooting.  I will also include interesting production details that may be of interest.  Some of these are funny, some are no so.
This shot is of my Po Man's Underwater Housing.
I just recently did a shoot in Si'an Khan, Mexico.  I'ts a world biosphere managed and run by local Myan families.  They guide you through the jungles and tell you about the flora and fauna.  They show you the ancient Myan ruins and then they take you an a swim down some rivers that were originally dug out by the ancient Myans as trade routes.  These rivers are incredible.
I was using a Panasonic HVX200 with a Firestore FS4 hard drive as my tool of choice.  It produces great HD images and is a light camera to operate.  I built a underwater housing for it using a fishtank.  The idea was for me to float behind the unit and shoot people having fun in the river.  So  I built a flotation device that had an air bladder that could raise the lens higher or lower into the water.  The whole rig worked great, but being that we were under Mexico's intense sun, the internal temperature of the fish tank got so hot that the Firestore drive stopped working.  I didn't know what to do.  I had to get the shots...  So I figured that if the hard drive was shot anyway,  I could try something drastic.  I put the drive in a zip lock bag and put it into an ice cooler that we brought to keep our water cold.  Ten minutes later,  I pulled it out and started it up.  Couldn't believe it - it worked.  I started calling it, "The Little Drive That Could."  We were really lucky.  I gave up on the fish tank and put the camera directly on the support platform with the air bladder.  I floated down the river with the talent and got the shots that we needed.  It was frightening in a few places where I actually was floating with the thing.  One false move and the camera would have been toast.
The  shots worked out fantastic.
Posted by Mario Madau at 12:49 PM