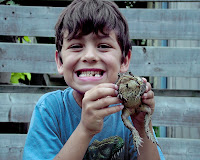 INVASION OF THE AMERICAN TOADS

We have a natural pond in our backyard. No pumps. No source of water except the rain. It's a typical wilderness pond that is naturally sustaining. It has native plants such as water lilies and native fauna such as snails and water striders.  We inherited this pond when we bought the house and are in the process of figuring out what plants and animals are here.  I at first thought it was a swamp.  I was simply amazed at the amount of life that was in it. 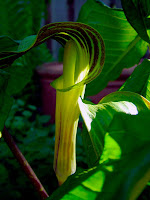 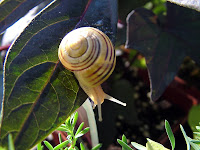 I've been photographing the pond for over a year now and have been amazed at the life that's in the water.  One major event that occurs on a yearly basis is the mating of the American Toad(bofus americanus).  They come in droves and for two weeks saturate the night time air with their mating calls.
Here's an example.

These toads are amazing.  We had about 20 breeding pairs.  The funny part is watching the unpaired males trying to get in on the action.  Like this one.

One thing about photographing mating toads, at least these guys and gals, they really don't mind.  I had a 50mm Nikkor micro lens about and inch away from the mating pairs and they didn't even budge.  Trying to catch the fighting going one was a different story.  The unattached males were doing everything they could to dislodge the attached males. It was quite funny to watch.  The females were constantly being jumped by 3 to 5 males all the while the proper attached male was kicking them off.  Many times the females went under with all the weight.  My wife vowed that if she ever saw that happen again that she would separate them and give the female a break.  I said that this is a natural process and shouldn't be interfered with. Besides, what female American Toad wouldn't like 3-5 male studs vying for her attention?
That's a typical male perspective of course.  Interesting conversation to say the least.

The toads come, use our pond to their delight, leave a few million tadpoles behind, then just up and leave. No thank you.  Nothing.

Well it's good to know that our backyard pond is helping these toads survive. If scientists say that frogs and toads are a good indicator species that show us the quality of our environment, at least there are a few million(maybe thousands) of little toads soon to be showing the way.
You can see the trail of eggs in this shot. 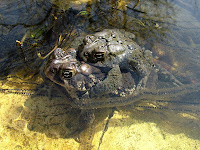 We like the night time calls and will be looking forward to it for years to come. One caviat though;  I'll have to find a way to mow the small lawn that we have without hurting the little guys.  Maybe it's time to get rid of the lawn.

I'm looking forward to photographing the little guys as their lives progress. It will be a family project to figure ways of protecting them.  Maybe I should invent a "toadsafe" lawnmower.
Posted by Mario Madau at 6:49 AM