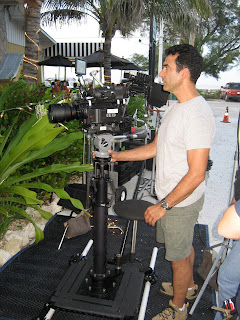 New Blog; Mario and the RED ONE CAMERA

An old director buddy of mine Gary P., called me recently and asked me if I would come down to Florida and shoot 5 commercials for a restaurant chain there. I had shot his first feature film "Jacob's Cry" a few years ago and asked him more about the commercials. When he said that we would be shooting on the Red One Camera I immediately said I was in. The Red One is a digital cine camera that shoots higher quality images than a 35mm film camera. At least that was what I read and had been told. This is the first digital video camera that has a resolution that exceeds 35 mm film, while the dynamic range is coming very close to traditional cameras. At its core, the camera uses a Mysterium CMOS sensor: The physical resolution of this monster is 4900 x 2580 pixels, for a total of 12.64 million pixels. The sensor measures in 24.4 x 13.7 mm (334 mm2). This area covers 4 separate HD frames 1920X 1080 each. I found that the RED is a stills camera on steroids. Since I do a lot of still advertising work and only shoot RAW, this camera was really easy for me to figure out. The reason why I love this camera is that it gives you the look of 35mm lens - that narrow depth of field look. You can't get that today with regular video cameras that operates using 3 chips.The Red shoots 4k RAW(4096) and 2k(2048) supports the industry standard HD resolution of 720p and 1080p, both using HD-SDI or the REDCODE codec to memory or hard drives. Shooting 4k is incredible. The diagram below shows the different size ratios.

The way I look at it is this - you shoot with the biggest baddest gun you have and create the biggest baddest negative or RAW file then you've got all the information you wanted to achieve. Then you can down sample to whatever format you need. What I mean here is that if you shoot 4k and you are down sampling to 2k, HD , film-out or SD, your image will have all the original data, will be sharper and show less noise when compared to shooting straight HD. Also, it will have that sweet 35mm depth of field look. Operating the REDONE was a breeze. I used the histogram on every set up. Image histograms are found in many of the advanced digital cameras. An image histogram acts as a graphical representation of the tonal distribution in a digital image. Each tonal value is plotted by the number of pixels. When you look at a specific histogram you can judge the entire tonal distribution at a glance. The histogram is usually in the form of a graph where the horizontal axis represents the tonal variations and the vertical axis represents the number of pixels. The left side of the horizontal axis represents the black and dark areas, the middlde represents the medium grey and the right hand side represents the lighter and pure white areas. I use the histogram to calculate the distribution of tones captured by the sensor and whether or not the image detail has been lost because of blown out areas or too dark areas. If you are interested in more detailes information, check out Ed Sutton's book; "Histograms and the Zone System." Or check out; http://www.cambridgeincolour.com/tutorials/histograms1.htm Great diagrams there. The histogram display in the Red was incredibly detailed and I used it to great advantage in my images. Another great feature is a viewable grey scale in the EVF - Electronic View Finder - in other words the eyepiece. By either adjusting the iris or the shutter speed I was able to make sure my exposures captured the image correctly. Here when I overexposed the white end of the scale started to burn out and visa-versa with the black.

I'm looking forward to shooting with this camera more and more. 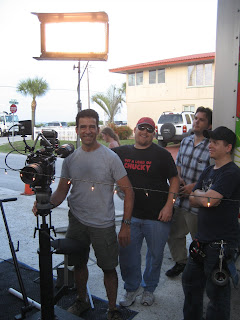 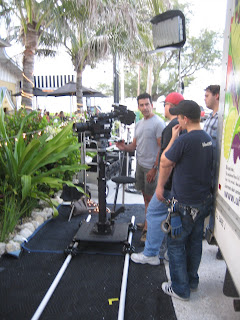